You haven’t felt true pain until you’ve stepped on a LEGO® or misplaced your Polly Pocket. You have the ‘90s to thank for that.

Let’s take a walk down memory lane, shall we? All the fuzzy, nostalgic feelings of fighting with your siblings over Power Rangers and Barbie dolls, getting pelted in the eye by Nerf darts, burning your fingers on Easy-Bake Ovens, and crashing your miniature Power Wheels into a nearby wall or person. Those were the good days.

These days, our favorite way to connect to the past is through the internet, and shopping for treasures like Skip It and Tech Deck on eBay. We at All Home Connections decided to do some online hunting of our own to see which ‘90s toys are the most popular in each state. Check out our final list to see if your favorite toy made the cut. 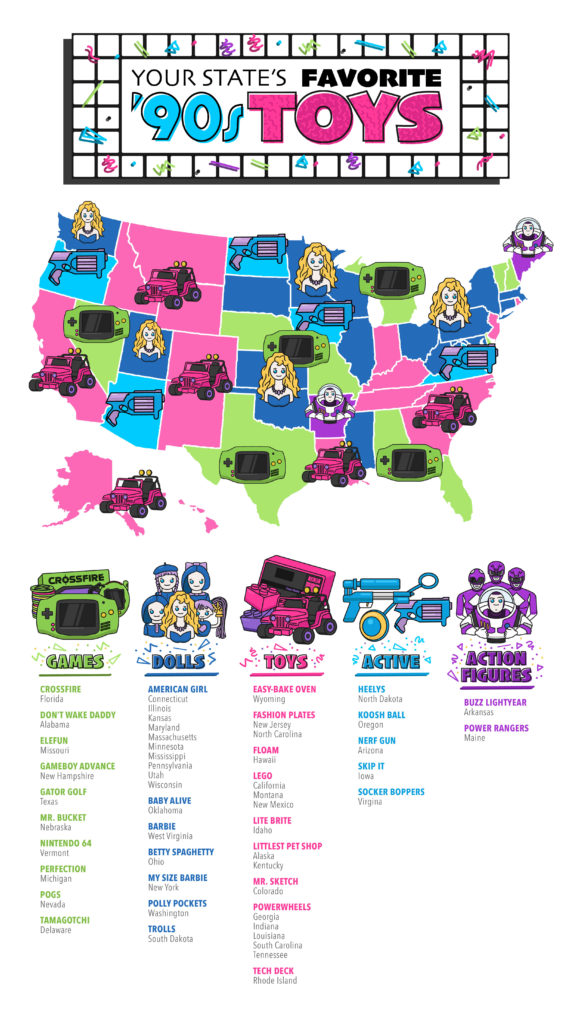 We compiled a list of the 50 most popular toys and games from the 1990s, then looked at Google Shopping trends over the previous year to determine which toys were the favorites in each state. We then looked at how much these toys sell for on eBay (and were shocked by some of the results, including $120 for Floam!).

Third degree burns, mini cars that don’t stop, and choking hazards galore. There’s just something about the ‘90s you have to…love? We broke down a few interesting facts in case you’ve forgotten what these toys were all about:

Your State’s Most Popular 90s Toy

Do you currently own one or more of these popular ‘90s toys? Try your hand selling them on eBay, or use AT&T Internet to buy a few for old times’ sake.